A short story published in:
“The Whole She-Bang 2”, an anthology of Canadian crime fiction.

The Whole She-Bang 2
e-vailable for $3.99 on most e-reader formats: Amazon.ca, Kobo, Smashwords

Trade Paperback available at:
The Sleuth of Baker Street, Toronto ON
Scene of the Crime, St. Catharines, ON

Shirley is opening Tugston’s historic museum for the summer season, cleaning up the dust and remains of creatures that had made their way in during the cold winter. The routine work twists into horror when she discovers that somebody else has died inside as well. There are no signs of forced entry or broken windows, and no identification on the human corpse. As the police search for clues, Shirley has to admit that the museum is having its best-ever opening month, the visitors discreetly making their way to the now immaculate but pruriently thrilling back bedroom. But Shirley tells Al, the museum’s maintenance man and only other paid staff, “If people think this museum is just dead storage, I’ll show ‘em. The police, too.” She then has to prove she can rid the museum, and herself, of this ghost. 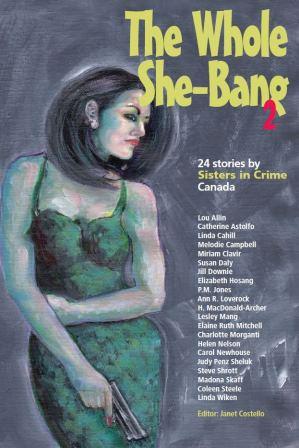