A short story published in:
“The Whole She-Bang 3”, an anthology of recent murder, mystery, and crime stories written by Canadian women.

The Whole She-Bang 3
Available as a Trade Paperback or
e-vailable for most e-reader formats: Amazon.ca, Kobo, Smashwords

Trade Paperback in stock at stores such as:
The Sleuth of Baker Street, Toronto ON
Scene of the Crime, St. Catharines, ON

Disaster Planning is set in a museum on the day of its annual emergency contingency drill. The real emergency for Gena, in charge of the drill, comes early when she discovers the corpse of her most-disliked co-worker, and she is suspected of murdering him.

“In the museum’s pioneer display the upper thick round millstone was turning, scraping against the lower one, the noise finally registering in Gena’s brain. But today the building was closed to the public. Why was the historic mill running? Why was the old farm tractor, on exhibit beside the mill, pitched on its side? Gena had to solve this problem. Because if she didn’t, she would have to accept that the turning millstone dragged around a tangle of clothes, and that meant the red and sodden parcel crushed by millstones and the tractor had once been a man.
A man she hated.” 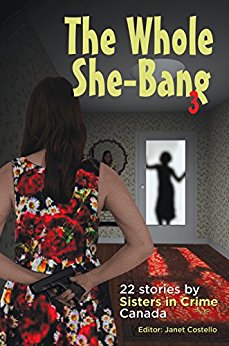